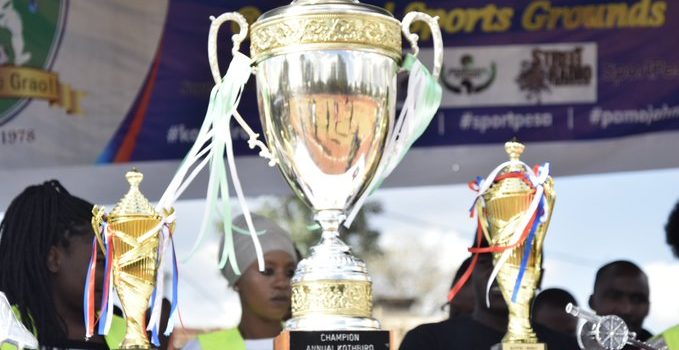 Kingstone fc are the new Kothbiro champions and with their win against Allin Jua Kali, they lift the first title in the new season edition.

Kingstone won the match 7-6 through post-match penalties also a first in the last decade. The match was tied 2-2 in regulation time. The finals witnessed by thousands at the traditional Ziwani Sports grounds, was full of thrilling action both on and off the field on Saturday evening.

The match started on a high with both sides going for the neck and showing their intent early on. This went on well with the crowd with both teams with a thousand plus supporters each baying for blood. It was Allin who got to the jugular first through Evans Juma who hit a rebound in the 20’ for a superb goal.

The second half started also on a high as the horns interlocked for a final push for glory. The carnivores from Shauri moyo quickly got to the score line as Walubukha’s cross connected excellently to Chrispinus  Onyago’s head for their second goal.

A resilient Allin were not unsettled but pushed forward and the spanner boys equalised in the 68’ through Walcott Walla’s free-kick thunderbolt that got the goal of the day accolade.

The SportPesa sponsored annual tournament went down to the penalties after the ref’s end of regulation time.

The Arnold Origi golden gloves award was entrusted in the safe hands of Borrusia’s  Job Ochieng. He will also receive a pair of gloves from the Finland based former Kenya number 1.

Tanzania’s Ndondo Cup sent a high powered delegation including its CEO Shaffih Dauda. Plans are in advanced stage for the winners of Kothbiro to play against Ndondo Cup winners.

The formerly traditional December Kothbiro season will be taken over by Kothbiro B which will be an Under 23 tournament.